*This post is in honor of my amazing daddy, for Father’s Day 2020

I love Jeeps, but they don’t love me.  In fact, the Jeeps of my childhood tried to kill me on a regular basis.  Even though I think they’re cool and look neat, I can just never buy one now.

One of the first vehicles I learned how to drive in, at the age of 6, was a little green 1970s model (I think…that was a freaking long time ago) Jeep.  I remember it had rusty floorboards and an old CB radio that we could never get to work.  My dad started out letting me sit in his lap to steer as we drove this old jeep back in the pasture to do odds and ends.  I remember the first time he let me drive it by myself, following him in on a tractor.  He had it down in granny gear and I think I was probably only going about 10 miles an hour, but I really thought I was something.

I had my first wreck in this Jeep.  I was seven years old, and my dad, a ranch hand, and I were cruising back to my house on the ranch.  This Jeep had drum brakes, and when they got wet from water crossings, they tended to….well….fail completely for a while.  In this case, I was in the driver’s seat by myself.  As we pulled around the side of my house to park, I pushed on the brakes and….crickets.  Nothing.  And so we slammed politely into the side of the big metal barn sitting parallel to the house.  My face also slammed into the steering wheel, and the ranch hand jumped out of the Jeep and took off, completely freaked out, before I even knew what happened.

My dad ran me into town to the doctor to make sure I was OK, but all that happened, in that case, was some bloody gums. The barn fared worse than I did, and that dent is still very much visible over thirty years later.  I don’t think anything happened to the Jeep. They made vehicles differently back then.

Maybe in retribution for running it into the barn, or maybe dumb luck, this same Jeep tried to kill me a few years later. My dad, brother Todd, and I were four-wheeling it across a mountain that separated two cow pastures on the ranch. As we were inching our way up to the top of that hill, still quite a ways from the crest, the Jeep’s engine died (or intentionally quit) and at the same time the brakes decided to fail.  We started rolling backward, and I started to panic.  My dad told my brother and me to open the passenger side door and jump out.  I was stuck in the middle and had no mind to stay there, so I promptly pushed my brother out (something he will never let go of, even after all these years.  I tell him that I saved him from his indecisiveness).

Todd and I jumped and rolled out onto the rocky side of that mountain as my dad, inside the Jeep, gained speed backward toward a cliff and a big drop off into the pasture from whence we had come. And wouldn’t you know…instead of jumping out himself and letting that cursed Jeep just go over the edge and destroy itself in a blaze of glory, my dad had to Indiana Jones it and whip the Jeep around sharply to the side at the last minute, getting it to finally stop.

I lost all trust in that Jeep from then on.  And my dad, God love him, had the nerve to try to convince me to get back in and continue on our way.  I refused to get in and told him I would rather walk over the mountain and the several miles back home than get in the blasted Jeep. (I was also a very melodramatic child). I had walked over the top of the hill and started down the backside when my dad finally convinced me to get back in for the rest of the drive.  Looking back, I should have continued to refuse…I don’t know how going headfirst downhill with failing brakes could be any better than what I had just experienced.  But, we made it home that day, and I continued to eye that Jeep suspiciously, never trusting it again, and refusing to drive it much.

I won’t even get into all the other stories now, like how when I was about three years old, sitting in the back of a Jeep on top of a mountain, and it slipped out of park while I was the only person in it….and someone managed to jump in just in time and save me before we careened off down the road…

There’s a song by Alan Jackson that I think is one of my top five all-time favorite songs. The lyrics in this song fit, to a tee, my childhood experiences, and every time I hear it, I think of what an amazing thing it is to get to learn how to drive when you’re a little kid.

Driving early is one of those great privileges of being a farm or ranch kid.  You don’t just learn, though, for fun; you learn because it’s needed.  There’s so many times my dad needed to move a tractor and plow or hay baler to a different pasture, and if my brother or I didn’t follow behind in the pickup truck (or blasted, not-to-be trusted Jeep) he would have had to hoof it miles home…usually in the glaring, summer heat.

I remember sometimes at night, when the cool of the evening set in, we would gather as a family in the truck to go “see what we could see”. We’d head back into a pasture we’d randomly choose (I grew up on a 6,000 acre ranch…there were plenty to choose from) and my brother and I would hop into the bed of the truck and usually make silly fools of ourselves while my parents had adult conversation, nestled away from us, in the cab of the truck.

One day in particular…I think I was six or seven….I really, really wanted to drive, and my dad said no.  We were driving along in the East Clark pasture, and I laid my head down on the edge of the bed of the truck as we drove along.  I can’t remember if I was really sad, or if I knew at that age that I had my dad wrapped around my finger already and I just knew how to manipulate him into getting what I wanted.  🙂  Well, it probably wasn’t more than 10 minutes of him looking at me in the rear view mirror, all pouty and pathetic, that he pulled over and told me to climb in his lap to steer the truck.  My dad looks like a tough man on the outside, but he’s nothing but a softie deep down.

The really awesome thing about my dad was that he never gave me hell about my terrible childhood driving record.  He teased me some, but he never got mad.  I was so adept at hitting things in the most stupid ways, or making really hair brained driving decisions on the ranch. ( I blame it on the fact that my prefrontal cortex hadn’t fully developed yet and it wasn’t my fault).  I would attempt to steer through gates that were wide enough to accomodate our big Ford tractor and plows, and I would still manage to drive squarely into a gatepost while trying to pass through.

One time in high school, I was backing our minivan out of the barn (aka, the party wagon that was bequeathed to my brother and me and was a constant source of shame and embarrasement), and the big, swinging, wooden barn door started to close on me. Instead of being a smart person and getting out to prop open the door, I had the super awesome idea of pushing the it open, while backing out, with my driver side mirror.  Let’s just say I was impressed with how deftly the barn door pulled off that mirror and broke the glass.  My dad didn’t yell, but instead reattached that side mirror and jerry rigged a replacement glass that didn’t look anything like the original, and let my exponentially raised embarrassemnt about that van serve as a lesson to me to not try to open barn doors with extensions of my vehicles anymore.  (Did I mention that my brother had already hit around four deer with that van, and so there were dents all over it, too?)

Then, not to be outdone by myself, later on in that year I backed squarely into my grandpa’s work truck.  My grandpa, who was amazing himself, had come over in the morning for coffee and had parked alongside the house behind my van.  I was heading into town to do something, so I went out and hopped into the van.  I couldn’t go forward, because the van was parked right behind my dad’s truck.  So, I reversed, and scared the living crap out of myself when I felt a solid slam.

OK, in this case I think maybe my dad did actually yell at me.  I really hadn’t seen my grandpa’s truck when I got in the van…my dad could not fathom this, and that’s totally understandable….I mean, the truck was literally two feet behind my van, and an obnoxious color of baby blue….an old Datsun with a metal frame my grandpa had welded onto the back.  The good part was, that my gradpa thought it was hysterical and never got mad at me.  I think the fact that he laughed so hard was probably how I got off easy with my dad.

I have more stories of driving as a child, but I think I’ll save myself the further embarrassment of recalling them.  As I got older, most of my driving debacles were mostly to blame on suicidal white tail deer and Russian hogs.

The third verse of Alan Jackson’s song goes:  “I’m grown up now, three daughters of my own. I let ’em drive my old Jeep cross the pasture at our home. ”

And that’s me! But I have three sons and won’t let them drive a Jeep…you now know exactly why.  But the last time we were in Texas I let them drive my truck on the family ranch, sitting in my lap just like I used to do with my dad. It amazed me how driving with them pulled up all those great memories I have of driving with my dad, and I recognized for the billion billionth time how freaking privleged I was to grow up where I did, when I did, and to have the dad I did.

I hope that when my boys are grown, they’ll also “reach back in that file, and pull out that old memory, and think of me and smile!”

Happy Father’s Day, Daddy!  Thanks for always putting up with my hair-brained shennanigans and for replying to them with more laughing than yelling! 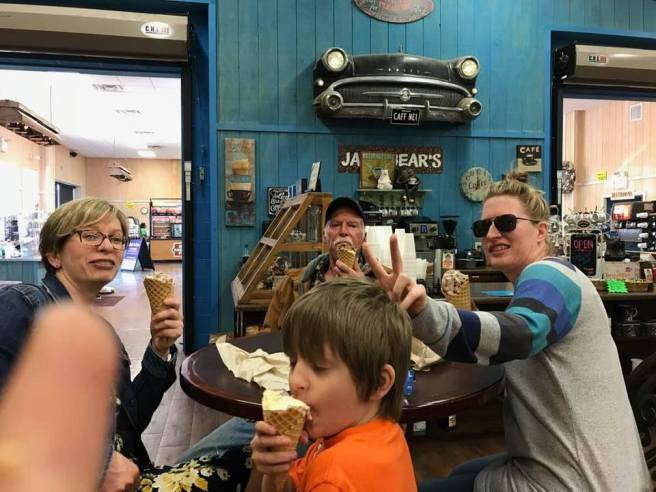 View all posts by juliemonroe1980

One thought on “When Daddy Let Me Drive”